A tsunami is a natural hazard consisting of a series of long, surge-like waves generated when a large volume of ocean water is rapidly displaced. Most tsunamis are caused by major subduction zone earthquakes, where there is significant displacement of the ocean floor. Tsunami waves differ from ordinary coastal waves in that the entire column of water from the ocean floor to the surface is affected. Tsunami waves contain considerable energy; they can travel further inland compared to ordinary coastal waves. A tsunami may not look like a wave at all, but will have very strong currents under its surface.

A tsunami is a series of waves. The first wave to arrive at the coast is often not the largest and each wave may be separated by up to an hour or more. Waves may continue for up to twelve hours; please stay away from the shore until local officials say its safe to return.

Tsunamis are a challenging hazard to respond to. The arrival time of the wave generated far out at sea can be predicted fairly accurately, however, the intensity of the wave when it reaches shore is more difficult to predict, particularly in real time during an event.

On the west coast of North America, tsunamis are categorized as local or distant, depending on the location of the earthquake and the size of the area affected.

A local tsunami is generated from a source within 1,000 kms or less than 1 hour tsunami travel time from its source to the area impacted. For the west coast of the Strathcona Regional District, it could be minutes before the tsunami reaches the shoreline. Damage and inundation from a local tsunami is typically widespread. Major earthquakes are often a precursor to a local tsunami. The most dangerous tsunami threat to the BC coast will follow a major, “megathrust” earthquake. Such an earthquake will cause ground shaking lasting three to five minutes. The shaking will be so strong it will be difficult to stand in many places.

How will I know if a tsunami is coming?

For a Local Tsunami STRONG SHAKING IS THE WARNING –
Do NOT rely on official notices for warning to evacuate.

In this case natural signs may be the only warnings to take action, such as:

If you are near the coast and feel a major earthquake making it difficult to stand, you must “Drop, Cover, and Hold On”, and then evacuate to higher ground immediately.

The first wave generated from an earthquake could reach with west coast of the Strathcona Regional District area within 15-20 minutes. The first wave to arrive may not be the largest. Get your Grab-and-Go bag and Emergency Plan if easily accessible and evacuate immediately on foot or by bicycle to an area outside of the tsunami hazard area.

Do not return to low-lying areas to gather your belongings. Emergency Officials will let you know when it is safe to return home.

A distant tsunami is generated from further than 1,000 kms away, or more than 3 hours travel time from the tsunamis source to the area impacted. Damage from a distant tsunami is typically limited to low-lying coastal areas. Response to a distant tsunami is significantly different than to a local tsunami. Typically, there is more time for an official warning and evacuation to safety. More evacuation infrastructure and support will be readily available during this type of event.

The Strathcona Regional District follows best practice by having several different notification systems in place within our community in order to achieve maximum warning to the public. Best practice recognizes that in most cases, notification systems activated in a real event will have some level of malfunction or failure despite rigorous pre-event testing.

During a distant event, the Strathcona Regional District will make every effort to broadcast official tsunami alerts and information by email, telephone, and text message via the Connect Rocket Community system, as well as by social media, radio and/or door-to-door contact if possible. The communities of Ka:’yu:’k’t’h’/Che:k:tles7et’h’ First Nation, Ehattesaht First Nation, Gold River, Tahsis and Zeballos all have their own tsunami sirens. 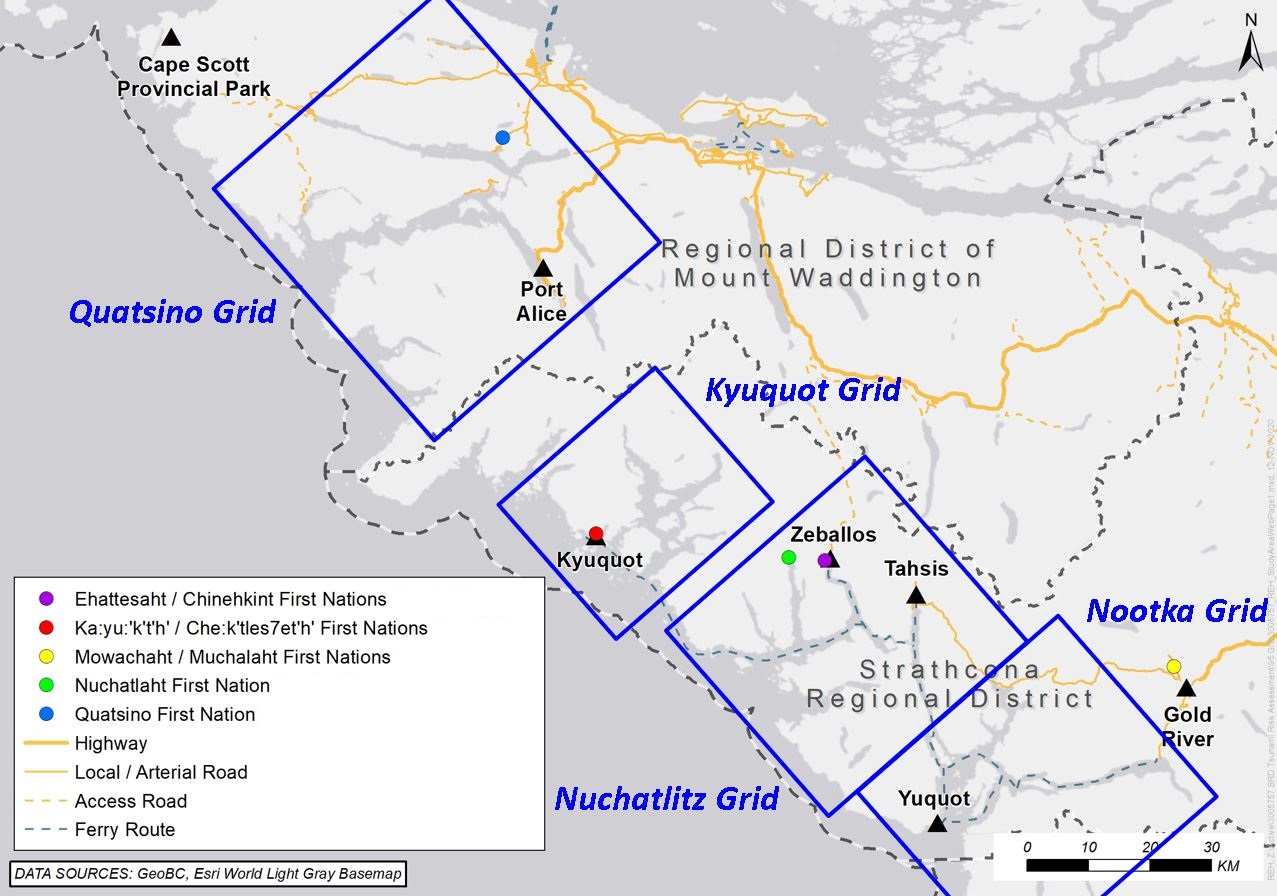 Pictured – four grids represented in the high-resolution overland tsunami mapping. Phase 1 of the project focused on the Kyuquot & Nuchatlitz Grids (see below). Phase 2 will be Quatsino & Nootka Grids

“Computer simulation of a distant tsunami from Alaska generated by a 9.2 moment magnitude Aleutian subduction zone megathrust earthquake, showing the propagation of tsunami waves in Esperanza Inlet and Nootka Sound on the Northwest Coast of Vancouver Island, British Columbia, Canada.”